April Was the Cruelest Month

Whoa! That’s a pretty heavy title for a post.

Never a huge T.S. Eliot fan, I even had to Google what that line means. In short, memories are triggered 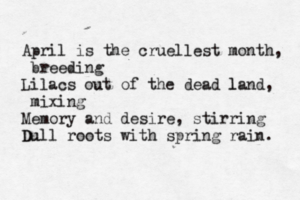 by springtime, and despair abounds as the numbness of winter melts. Oy! Eliot was clearly not a happy dude.

You probably don’t want to get depressed while reading this. You might as well read “The Waste Land.”

Even though my month sort of sucked for a variety of personal and professional reasons,  I’ll keep this post inspirational and upbeat.

When I look back at the past 30 days, a lot of great things happened.

April was the first month out of 17 in Arizona that I haven’t traveled at all.

The good news is that I finally feel “settled” in my western home. I attended quite a few local events, met great people, and was finally able to establish a work-out routine. But my realization is that, much like the cowgirls I identify with, I am wanderlustful and curious. I need to leave my ranch and ride around the prairie in order to be truly happy and challenged.

Although Phoenix is growing rapidly, I find myself missing New York snark and energy much of the time. Making friends in later life (especially as a solopreneur) is not easy, but I haven’t given up hope.

As cruel as April was, I often found myself “singing in the rain.”  Yes…I am mixing T.S. Eliot and Gene Kelly here.

The month in review…

The very good news for the future, starting next month is that:

So, with all due respect to Mr. Eliot…April can be cruel but May is usually full of flowers, sunshine, and all kinds of wanderlusty (and other) surprises and cavorting.

So, whenever you need a boost, just shout “May Day” and I’ll help you sprout new ideas for innovation, fun, new connections, business growth — and shake off the cruelty of April.

<< March: When Bots & Bodies™ Collide
Tech Companies Beware. Your Brand May Be Boring. >>