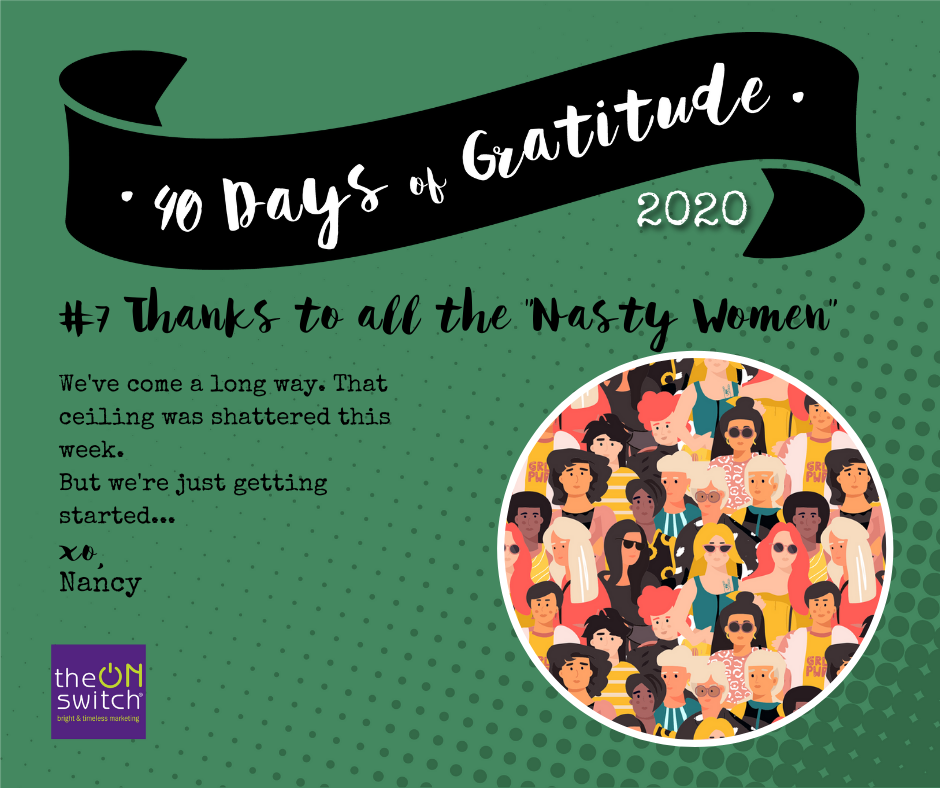 This week, a woman did something amazing.

She became the first woman to serve as Vice President.

As a little girl in the 1960s, I wrote that I wanted to be a nurse or a teacher.

After all, those were the “girl jobs.” A gig as a flight attendant (or stewardess, as they were called by then) didn’t appeal to me. Perhaps I didn’t like the uniforms or the fact that I had to smile all the time.

I was very aware throughout my early education that girls and boys were treated differently. The science and math teachers favored the guys in my classes and I was only allowed to take “Home Economics” (like sewing, child care, and cooking) but not Wood or Electrical Shop. I had to wear a skirt to school every day.

Fueled by the feminist movement, I eventually broke free of stereotypes and pursued a government career while in high school and college. I saw woefully few women on the Hill when I worked in D.C. The following summer, I could only get a civil service job, typing, and getting coffee. I bailed on a government career and decided to work in the private sector.

Even when I graduated college (with solid grades and work experience), I had to take a secretarial job to get my career jump-started. The late 1970s were still very much the Peggy Olson era. Men made decisions. Women made coffee.

I chose a media company that had a high turnover rate, to increase my chances of a promotion. I wrote my graduate thesis on the status of women in publishing and discovered that fewer than 5 percent of senior leadership in the industry (which was primarily female) was comprised of women.

At my first-ever sales meeting (in my early 20’s), a senior executive declared at a cocktail party, “You look good enough to rape.” The Queens girl in me took over and I glared and shut him down, but I worried about the aftermath because we didn’t even have HR departments to talk to back then.

During my financial services career era, I began to see more women in positions of power and responsibility. We often had to choose between family responsibilities and career advancement.

We had no technology to keep in touch after we left the office at the end of the day (unless you count fax machines).

And women were reticent to bring other women along as they reached the top. When I asked a woman boss if I could attend a senior meeting, she said, “It took me 10 years to get here. Why should I make it easier for you?”

Sadly, she was not the only woman leader who felt that way. Many of my career breaks during that era came as a result of men’s mentorship and opportunities, rather than the support of other women.

When we achieve positions of power we’re sometimes  referred to as “nasty,” “aggressive,” and “whiney.” But that’s all beginning to change, little by little.

The tech world of the 2020s is not unlike the financial services world of the 1980s. The “bro culture” is gradually changing, but sexism and ageism (especially towards women) are realities.

I am thrilled that my daughters and granddaughter will grow up in an era with a strong female role model running the country. They will be able to speak up without fear of retribution.

We will all (I hope) lift each other up and abandon the competition, gossip, and jealousy that often ensue from a mentality of scarcity and fear.

Although nursing and teaching are actually great career options these days, we have many other choices. Technology enables us to contribute to the C-Suite even when we need to be at home.

We still need to:

So, today, I want to express thanks to the women role models throughout history — the “nasty” women and supportive men who spoke up to make the change and clear the way for the rest of us to thrive and prosper.

And who knows? Maybe I’ll go back to work in government one day…