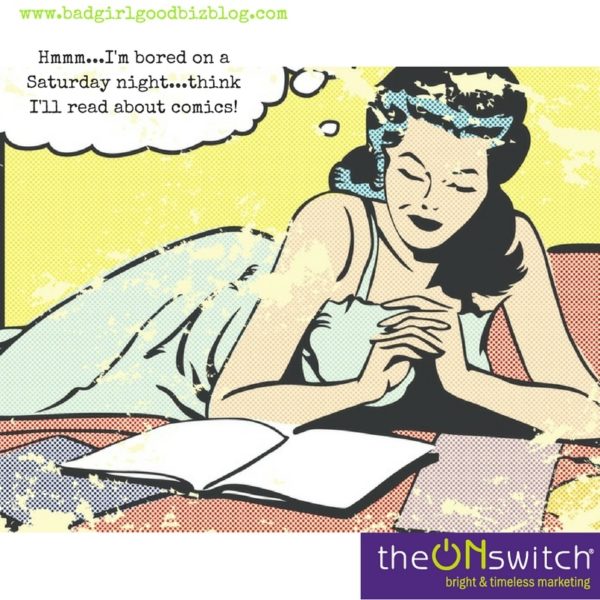 Long before memes and GIFS…

The comic book made us laugh (sometimes). My latest “Business of Fun” post scooped up a taste of the $11 billion ice cream industry. Now we’ll turn the page to another childhood treat; one that grew into a highly-profitable industry — comics. They take the form of comic books and comic strips.

The size of the comic book industry is estimated at $800 million and some publishers are thriving. Comic-Con had a three-year economic impact of close to $500 million in San Diego. We’ve come a long way from the first American comic book, which was 40 pages long and hardcover and sported the less-than-action-packed title of “The Adventures of Obadiah Oldbuck.” It didn’t even have word bubbles…just captions under the pictures.

Here are just a few of the popular genres:

Although Zorro, Buck Rodgers, and Tarzan were born before then, the Great Depression and World War II gave rise to many of the superheros we still follow today. Comic books were banned by Hitler, who called them “too Jewish.” Actually, most of the early comic book illustrators WERE Jewish. Go figure! Here are the 11 most valuable comic books today. They all feature action heros. One original edition comic sold for more than $3 million! That’s pretty super (or pretty comical…depending on how you view it).

The Superheroines…Fighting for Justice (and Boys)

Girls actually represented a larger segment of the comic reading market than boys in the 1940s and 1950s. Although women with superpowers existed from the early days of the comic book, publishers soon came up with a whole new range of characters, such as  Nellie the Nurse, Tessie the Typist, and Millie the Model. (Where was Carla the Coder or Sally the Senator? Alas, it was a sign of the times.)

Women superheroes are often the topic of feminist discussion, as they are never quite as strong as their male counterparts. They have to wear those super-short skirts, which look really uncomfortable. Some of the most epic fights in comic books did not involve evil villians. Betty and Veronica were introduced in 1942 to battle over Archie and the updated series now gives them a Thelma and Louise badass edge. They apparently turn on each other now, which I’m not sure is a great message for young girls!

From 1941 to 1971, bright publishers turned the classics into comic books. (I happen to collect Classics Illustrated Comics and continue to be wowed that A Tale of Two Cities actually exists in comic book form!) Although not technically a comic book, the New Yorker magazine has included cartoons in its issues since it began publication in 1925. While comic book publishers were licensing their characters for movies and toys, the magazine created its Cartoon Bank to generate incremental revenue.

Dilbert by Scott Adams made the workplace into a comic strip, pointing out the absurdities of office life. And that tradition is now being carried on by The Cooper Review.

From Comic Book to Mac Book: The Role of Technology in Comic Books

These real-life inventions were inspired by comic books. Marvel is looking to make its comic books more inspirational and educational with its series of STEAM-inspired comics. (That’s Science, Technology, Engineering, Arts, and Math.) The publisher is also introducing Augmented Reality to the comic book experience, allowing readers to unlock digital extras.

In closing, here’s a great quote from Stan Lee who has been writing and illustrating comics for much of his 94 years and was the former President/Chairman of Marvel, “To have an idea is the easiest thing in the world. Everybody has ideas. But you have to take that idea and make it into something people will respond to — that’s hard.”

That applies to comic books, to business, and to life! Thanks Stan for giving us something to respond to!

P.S. Only a few more installments left in the “Business of Fun” series…then it’s back to school/work. Do you need help generating engaging content for YOUR blog, website, or newsletter. Call on theONswitch super heros — a team of badass and visionary marketing professionals — who fight against boring content and generate ROI!