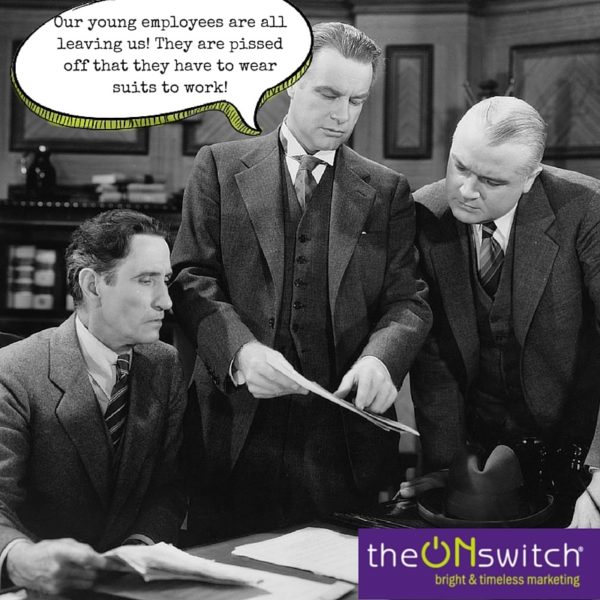 Many of my peers stayed in jobs for more than ten years.

Those days are long gone. The majority of young workers leave their jobs within three years. Perhaps my peers just had a higher tolerance for pain and suffering. Or we believed that we would be rewarded for loyalty. But millennials are looking for different things from their careers, as illustrated in these charts.

The term “culture,” which once applied just to going to the theater or museum is now an important word for companies of all sizes. If you want millennials to stick around and be happy and productive in their jobs, you need to create an environment that works for them.

That is, in itself, a radical departure from the way companies were run back in “my day.” The only choices I had were which health plan I wanted, what I was going to eat in the cafeteria, and which pen or desk accesory I thought was the  least tacky from the 4-color “Reward Catalog” that someone in HR thought was a nice way to pay homage to high performers. (Oh goody…I busted my ass and now I have a really cool faux gold pen!) Even perks like a bigger office have lost their appeal, as many companies have moved to open space or telecommuting.

This new world is much more humane and interactive in many ways and my generation can learn a thing or two from the next wave of leaders.

In my own career, I was usually brought in to disrupt or re-imagine some aspect of a company’s operation. But, as with organ transplants, the “body” in which I was working often rejected wildly innovative thinking. Some organizations have finally wised-up to the fact that young people want to make an impact on the businesses they work with have begun to build a spirit of  intrapreneurship into their cultures — acknowledging that they should listen to and incorporate some of the things that come out of the “mouths of babes” rather than automatically rejecting them.

Creating a start-up culture within an established organization is no easy feat. One of my previous employers  moved their young creative “think tank” group up to a different floor of the building and allowed them to operate as a “company within a company.”

Although segmenting employees by job function can be a great idea, dividing them by age is definitely NOT. The true formula for success lies in building collaborative teams — where old and young (Boomers & Millennials) feed off each other’s super powers, mentor each other, and co-exist in peace and harmony. Checking that “us and them” attitude at the door is key.

But what if things just simply aren’t working with your millennial employees? Pitching a fit, threatening, and lecturing didn’t work back in my day and it definitely doesn’t work today. Here are some great tips for giving feedback.

Of course, none of this guarantees that your millennial employees will stick around forever. But if you can get an awesome three years out of them, that’s a big accomplishment. And who knows? Maybe they’ll hire you to work for them one day!

<< Tech and Sex: Wasted on the Young? (Chapter 2 of Millennial Mania)
Growth Spurts and Strained Muscles: When Businesses Hurt (Chapter 4) >>