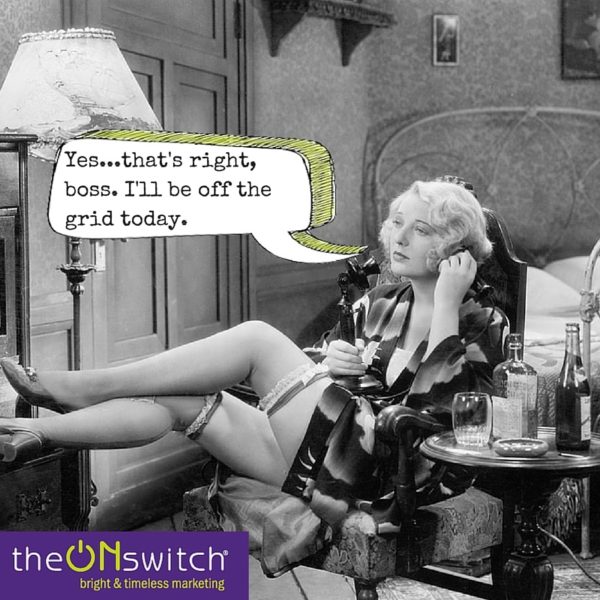 We’ve all heard of “calling in sick,” right?

Although no one really calls these days. They just text or maybe e-mail. (Calling one’s supervisor on the phone back in the day and telling him/her you were sick was always tough…you had to sound just weak and raspy enough to be credible…maybe even throw in a few hacking coughs.)

I’ve had my own services business for almost thirteen years. That means working most of the time, being tethered to my phone, and not really being able to “call in sick.” First, because the boss is me. And second because I have client responsibilities.

But this week, something happened.

First, a close friend told me that I seemed “tightly wound.” This concerned me. Although I’ve often been told that I can be intense, I realized that my first quarter stresses and recent disappointments (personal and professional) had pushed me over the edge. Despite my commitment to mindfulness and measured breathing, I was becoming brittle and bitter (never a good combo).

So I decided to unwind, unplug, and take the entrepreneur’s version of Ferris Bueller’s day off. I had returned a day early from a business trip, so few people even knew I was around (although now all my entire social media network knows it). I slept late, went to the gym, and got my hair trimmed and blown-out. Then I bought some beer for my friend and a bunch of daisies for my apartment. Of course I had to do some work. But it was writing, which is one of the things I love to do. So it almost didn’t count. The day ended with Shark Tank and Seamless…more self-indulgence.

Hardly a wild day. I didn’t jump on a parade float or sing “Twist and Shout” but I allowed myself a few hours of totally focused “me time.” The last time I remember doing that was my impromptu Labor Day weekend trip to Denver, where I biked for 20 miles, hiked, and got my ear pierced. (A theme seems to be emerging here…endorphin rush + girly thing = relaxation.)

Ironically, I now publish a blog for women in the service industry (sheBOOM). I counsel them to make time for themselves, to slow down and breathe, and take time to enjoy life. Being “of service” to others is especially exhausting and stress-producing. I’m still working on a product idea, so I can make money while I sleep or do crunches or cycle.

But now I’m trying to heed my own advice, and I urge you all to take a “Ferris Day” (or some part thereof) every now and then. Pick a couple of things you really like to do, and just do them.

The next day, I was way more mellow at work. The flowers remind me of those few hours of playing hooky.

In the words of Ferris, “Life moves pretty fast. If you don’t stop and look around once in a while, you could miss it.”

P.S. If you do happen to have a boss, here’s how to pull off a Ferris Day without losing your credibility or your job.

<< New Eyes
Skorts and Snapchat: The Rise of Fashion Tech >>