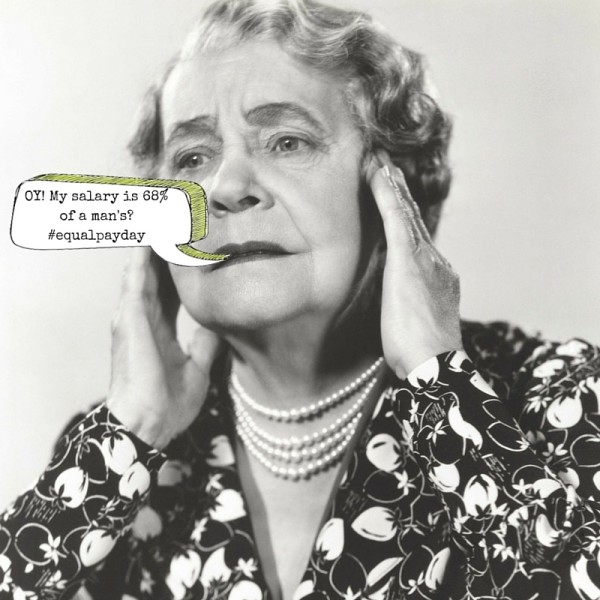 I am certainly not an old bag. Or a lunatic feminist.

In fact, I’m smarter, calmer, more strategic, and more capable than I’ve been in my entire life. I have more energy and more perspective. I’ve been a C-level executive, an entrepreneur, a professional speaker/writer, a mom (and now a grand mom).

I try not to be angry. But I can’t help but be a little pissed off when I read articles like this. I just learned that I’m “worth” 68 cents on the dollar. (Women my age earn 68% of their male counterparts’ salaries.)

Facts like this remind me of how far we, as women, still have to go. The gender pay gap won’t close until 2059. I’ll be almost 100 years old by then. I’ll still be working. But probably  for myself because many companies in my industry discriminate against “grey hairs.” (Kudos to Dan Lyons who is bringing the issue to the forefront in his new book!) I’ve been told by a recruiter that I’m probably “unemployable” by a major corporation at this point, due to my age. I appreciated the honesty, but it made me sad none-the-less.

Today is Equal Pay Day (not to be confused with the candy bar — which I’m linking to because it probably draws more Google searches than the real issue).

I wrote a post recently about the pay gap and I was deluged by comments from angry men who said things like, “Men and women are different” and brought up the whole “Why don’t you fight in wars?” argument. I usually respond to all the comments I get on my blogs, but those simply flabbergasted me. We’re not talking about Mars and Venus or physical differences. We’re simply talking about equal pay for equal work. I know for a fact that I held three positions in which I was paid 20% less than men who held the exact same positions. I recently applied for a marketing job and wasn’t called for an interview, even though I had significantly more experience than the young man who was eventually hired.

In one of my corporate roles, I heard a man (who worked in HR — the ultimate irony) say in an executive team meeting, “Women — can’t live without ’em…can’t kill ’em! The other women at the table simply giggled. I kid you not. But I’m not writing this to rant about bad behavior…bullying…or whether or not I should carry a gun and wear camo and army boots.

I’m simply asking you to read the facts. And think about whether you want your daughters to wait until 2059 to earn equal pay for equal work.

I would wish you all a happy Equal Pay Day, but there’s nothing happy about it. And I hope I won’t have to write a variation on this post next year — and certainly not for the next four decades.

P.S. If the men who are reading this have a different perspective, I’m happy to see your comments. But let’s keep it factual — not emotional or crazy. After all, that’s what we women are sometimes accused of being!

<< Changes
Women at Your Service (The Behind-the-Scenes Story) >>