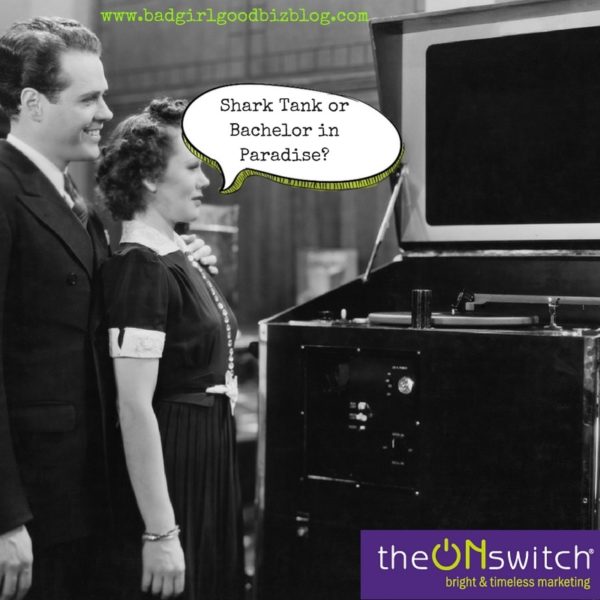 Yesterday’s post was all about the fun we have going to the movies. But we also like to be entertained and escape from the privacy of our own homes, offices, gyms, and public transportation systems.

Television has been around since 1927. It was, in fact, invented by a 21 year old (who lived in a house without electricity until he was 14). The word “television” was first used in 1900, according to this timeline. I bet that none of the early inventors could have imagined that their innovation would be used to broadcast the escapades of real housewives or to share the Olympics around the globe.

Here are just a few of the other ways television has changed since then.

Millennials may think that black and white just refers to an Instagram filter and that rabbit ears are simply a part of a bunny’s anatomy, but the television sets we Boomers grew up with were colorless and we needed to fiddle with the antennae on top of the TV to get a decent picture. Plus, your house needed an antenna on the roof.

Nielsen estimates that more than 116 million homes in the U.S. now have TVs and big screens only came into being in the 1990s, as the techology evolved. A whopping 83% of free streaming TV is now being watched on a computer and “mobile television” has only come into being in recent years. And yes, it’s in color (unless you’re watching an old movie).

Younger people are actually watching less TV these days, although we all spend a lot of time glued to our sets/devices. Here’s the breakdown. The average child watches close to 1,500 minutes of television each week. Nielsen, the granddaddy of television viewership tracking (founded in 1923!) has evolved to track other types of consumer media behavior.

Of course, marketers will always go where the eyeballs are. This year, more than 27 million people watched the Olympics. The Superbowl is still a high-scorer with close to 112 million people watching. Next year, online advertising is expected to surpass television ad buys, but some big brands are still spending some big bucks on conventional media. Cars and consumer products rule, according to this breakdown of top television ad spenders.

Sponsored content and product placement are creeping into your living room and bedroom now. And how is this for invasive? New technology enables advertisers to place products in old TV shows. Will I soon be watching Lucille Ball swigging a Red Bull? I think I will love Lucy a little less if that’s the case. Although I work in marketing, some classics should just remain as they were.

Football, zombies, and sit-coms are currently America’s faves. And although the boom days of reality TV may be drawing to a close, according to Vulture,  Survivor (introduced 15+ years ago), spawned at least 300 more reality shows. When will the final rose be handed out?

The longest-running game show was “The Price is Right” and these shows used to be rather mild and uplifting. Newer game shows are high-tech and some even involve public humiliation and resemble gladiator battles. Others are skills competitions — everything from tat artistry to cupcake baking. But the networks are making an effort to bring back the good old fashioned game shows this season.

Although television has always had “hosts” (think Ed Sullivan and Dick Clark), hosting is now a lucrative and apparently legitimate profession. You can even take hosting classes.

Of course, I could dedicated at least one entire post just to “web television.” Every media outlet is now officially a television producer! Stay tuned…

As we all know, we have virtually unlimited choices of what to watch these days. For a small fee, we can find any content — new or old — on virtually any device. The set-top cable box (like rabbit ears) may soon be an antique, according to this article.

The 80-year old industry of TV programming and traditional networks is desperately trying to figure it all out. Here’s a great overview of all the issues from, ironically, one of those networks.

Television programming can be uplifting, entertaining, educational, or simply mind-numbing. How and when we watch our shows — on a giant screen or in the palm of our hand — is now our choice. We can dissect or ignore advertisers’ messages.

I personally love being able to watch all my old classic faves (like The Twilight Zone and the Wonder Years) and think about simpler times, catch up on the evening news, pick up pitching tips from “Shark Tank,” veg out to reality TV after a long day at the office (while sometimes viewing my Twitter feed or enjoying the “second screen experience“), try to “win” Jeopardy from my couch, and delight in the fact that I have more than five channels now. And I never have to ask my parents’ permission to watch nor stand up to adjust the antenna.